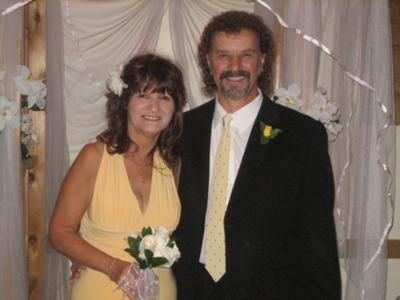 This is a “true story” about how I met my Husband on a dating site on the Internet. It’s the unbelievable story behind it that’s truly amazing!

I used to hang out at a country bar called the “Club Palomino”. I loved listening to good bands there, and dancing to their country rock music. I used to drag my friend out to see my favourite band playing called “Cheyenne”, who were amazing and always packed the place. My friend and I used to get up and dance to their songs. I was interested in the rhythm guitar player in the band, to me, he was the best looking one, and I loved his voice along with his rhythm guitar sound. Yes, I had the “hots” for him and would goggle eye him playing his guitar/singing while I was on the dance floor, or just standing at the bar listening and staring. I’ve always had this thing for bands as I play guitar too, and always wanted to play in a band. They played there for a long time and were the best band at the “Club Palomino”. I would go there as much as I could just to hear them play, and of course, always watching my favourite player. The sad part about it was I used to see him with a blonde girl, not knowing if she was his girlfriend or wife.

After seeing them playing there for a long time, the “Club Palomino” closed down. Yes, the club had been sold. Wouldn’t you know it a huge townhouse sub-division was put up and the club was gone. So were all the bands and my favourite band, “Cheyenne”.

When I first found out about the club closing down, I wanted to approach “Cheyenne”; particularly the rhythm guitar player and ask where they would be playing in the future. But I didn’t have enough courage to do that. I guess things happen for a reason.

As time went on I met someone and got married. That was a mistake. Eventually we got a divorce. I started going out to bars, again, got tired of it and not meeting anyone decent enough. I wasn’t crazy about the bands playing at other bars either. Later, a friend told me to join a particular dating site on the Internet, which I thought I would never do. But, I thought I would check it out for fun as I heard so much about it through people even meeting their soul mates from that site. Surprisingly enough, I had a few dates, meeting in public places, but just didn’t find the right one and thought I never would from a dating site. I sort of gave up on it until one night. After getting home from a bar, which I hated, I went on my computer. For some reason I logged in that site again which I was really glad I did. I got an interesting email from a guy and liked his picture. I was also touched by his email and that he was also interested in my picture and profile. From then on we started emailing each other quite a lot from that site. We seemed to have so much in common through our emails. We continued writing and eventually got on MSN, and chatted for quite some time. He was Bulgarian and I was Hungarian, how common was that! We discovered from our MSN chats that we had so much in common. It was really amazing. Our families even lived in the same town of all places. We chatted every night as often as we could.

And then, a miracle happened! We started chatting on our computers about music. Wow…we also liked all the same music and we both wrote songs. I told him I liked country music and used to frequent a particular bar about 15 years ago, which had closed down. Of course he asked me the name of the bar back then. I told him the “Club Palomino”. He was really surprised and told me he used to play there. I wasn’t sure whether to believe him or not! He said he would send me a picture of his band that played there. I thought, “yeah right” to myself as I waited patiently in front of my computer for the picture. Lo and behold, a huge picture came up on my screen, “CHEYENNE” “CLUB PALOMINO”. I freaked! I couldn’t believe it! It was him in the picture with “Cheyenne”. The guy I was interested in who was the rhythm guitar player in my favourite band. I was so shocked that I went crazy seeing this picture! It was just unbelievable! Like a miracle happened suddenly! Like a fairy tale! We carried on chatting every moment we had for some time, and eventually he gave me his phone number. We started talking on the phone every night. It was just amazing all the things we had in common about everything! Yes, it was too good to be true!

After about 3 weeks of talking on the phone every night, chatting on the computer & exchanging pictures, we decided to meet. I was brave enough for him to pick me up at my mother’s place as I developed this trust in him, by his voice and his honesty. I met him downstairs in front of my mother’s apartment building. He got out of his car, and the first thing we did was look at each other and start laughing, and laughing like crazy, and couldn’t stop laughing! He took me to the local Canadian Legion where we talked, had a drink together (still laughing) and we got more acquainted. Eventually we went into another room and sat down at a table. After a while, he asked me if I didn’t mind if he got up on stage to do a solo. Hey, a man singing with his guitar was like being in heaven. He got up on stage and started playing his guitar and singing in front of an audience. That did it for me. I was hooked! And the guy I admired 15 years ago was performing in front of my eyes, and, was my date! I was in heaven!

We dated for about 2 years and it was absolutely wonderful. Eventually we bought a condo and have been living together for over two years now. Then, the final surprise! After moving into our condo, we looked out the window and to our astonishment what did we see? The office building of the dating site we joined of all things! What a coincidence that was! In March of 2008, it will be 5 years being together, playing music, and still laughing! We are just two peas in a pod!

He met my friend who I was with at the Club Palomino 15 years ago, and he also remembered seeing us dancing while his band “Cheyenne” played. He also remembered me standing at the bar at times. I used to watch him go to the bar for his coffee and I know our eyes met each other’s at that time. It sure is strange crossing one another’s paths some 15 years ago - and now, being together in a different time in the future, and remembering!

And by the way, that blonde girl he was with at the Club Palomino, was the girl he eventually married which lasted 8 years. He went through a brutal divorce. He did tell me that when I first saw him at the Club Palomino 15 years ago, that I should have approached him and told him “she was bad news”. It’s funny how life is – it just wasn’t meant to be back then. Fate brought us together. We found our “soul mates”!

Original content copyright © 2009 - 2011 Love-Poems-Etc.com.
All Rights Reserved. All other content is in public domain,
copyright by the credited author or unknown.
Please contact us if any correction is needed.